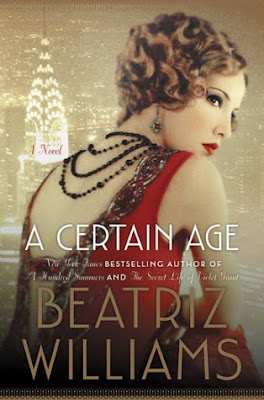 But their relationship subtly shifts when her bachelor brother, Ox, decides to tie the knot with the sweet younger daughter of a newly wealthy inventor. Engaging a longstanding family tradition, Theresa enlists the Boy to act as her brother’s cavalier, presenting the family’s diamond rose ring to Ox’s intended, Miss Sophie Fortescue—and to check into the background of the little-known Fortescue family. When Octavian meets Sophie, he falls under the spell of the pretty ingénue, even as he uncovers a shocking family secret. As the love triangle of Theresa, Octavian, and Sophie progresses, it transforms into a saga of divided loyalties, dangerous revelations, and surprising twists that will lead to a shocking transgression . . . and eventually force Theresa to make a bittersweet choice. - from Goodreads

Normally, I am a huge Beatriz Williams fan, but A Certain Age just missed the mark for me.

A Certain Age tells the story of Theresa Marshall, a 40-something married woman having an affair with a much younger man, Octavian.  When Theresa's brother, Ox, decides to propose to Sophie, he utilizes this strange upper-class custom of sending another man to actually do the proposing.  Octavian is charged with this duty, and he and Sophie, of course, fall in love at first sight.  And for a little extra drama, there's a murder mystery involving Sophie's family.

At the beginning, Octavian seems so in love with Theresa; he wants to marry her, maybe even start a family.  Theresa, though, is a bit reluctant; although her feelings for Octavian are strong, she plays them off as casual.  Theresa was probably my favorite character - the one with the most depth, and I don't think Octavian deserved her.  Octavian, on the other hand, never came alive for me as a character; he felt so flat and boring.  The feelings between Octavian and Sophie weren't grounded in anything, and the way these two fickle characters changed their allegiances literally overnight didn't sit well with me.  I felt particularly bad for Ox; a lifelong bachelor, he finally found a woman he could see himself settling down with, and she broke his heart.

But there were bright spots.  Beatriz Williams has an incredible ability to set a scene, and I really felt transported to the Roaring '20s in New York City.  Her writing is fun and readable.  And fans of Williams' other works will recognize a character or two.