When a Sequel is a Bad Idea 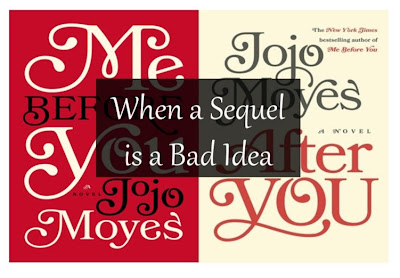 Ok, that post title sounds a bit harsh.  Let me back up a minute and explain.  On a recent Top Ten Tuesday list, I listed Jojo Moyes as one of my favorite new-to-me authors of 2016, as I finally read Me Before You and loved it.  I received a comment from another blogger that I should consider reading the sequel, After You.  Now, don't get me wrong - I love receiving recommendations from other bloggers.  But - I am actually kind of scared to read After You.  I thought Me Before You was a practically perfect self-contained novel, and I loved the ending.  I worry that the sequel won't live up to the original, and the magic will be ruined for me!

Sometimes perfectly awesome books get unnecessary sequels (at least, in my opinion).  For example, Scarlett is just one of many sequels and prequels to Gone With the Wind, although none were written by Margaret Mitchell.  Lauren Weisberger released a sequel to The Devil Wears Prada 10 years after the original came out.  Even The Nanny Diaries by Emma McLaughlin and Nicola Kraus had a sequel, taking place 12 years after the events of the first book.  I've read all of these, but in the back of my mind was always thinking to myself, was this really necessary?

Obviously, the authors feel there is more story to tell, but sometimes I feel like it's better to leave the original alone than to continue the story in a way that may alienate their audience or be inconsistent with the original.  I don't mind books that don't have a clear resolution or are open-ended in some way.  It gives me the freedom to imagine my own ending and where I think the characters might go next.  In the case of Gone With the Wind, the next chapter of the love story between Rhett and Scarlett is left up to the reader to imagine.  And sometimes a book has a pretty definitive ending that doesn't really lend itself to a sequel.  That's how I feel about The Devil Wears Prada and The Nanny Diaries; these two stories wrapped up fairly well and I didn't see a need for more.

For me, these sequels just didn't live up to the thrills or charms of the original, whether it be through the writing or the stories themselves, and I'm worried about being burned again.  With Me Before You, yes, it's a sad ending but there's a sense of hope for Lou, and I want to preserve those feelings.


So, has this ever happened to you - have you ever come across a sequel that you didn't think needed to be told or didn't fit with the original?  Is it important that I read After You?﻿
Posted by Angela at 7:00 AM