Thank you to Trish Collins at TLC Book Tours for inviting me to be a part of the blog tour for The Door-Man by Peter M. Wheelwright!  I was provided with a free copy of this book in exchange for an honest review. 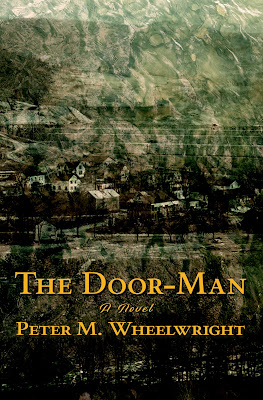 In 1917, during the construction of a large reservoir in the Catskill hamlet of Gilboa, New York, a young paleontologist named Winifred Goldring (1888-1971), identified fossils from an ancient forest flooded millions of years ago when the earth's botanical explosion of oxygen opened a path for the evolution of humankind. However, the reservoir water was needed for NYC, and the fossils were flooded once again, along with the doomed town.

A mix of fact and fiction, The Door-Man follows three generations of interwoven families who share a deep wound from Gilboa's last days. The story is told by Winifred's grandson, a disaffected NYC doorman working near the Central Park Reservoir during its decommissioning in 1993.

The brief and provisional nature of one's life on earth – and the nested histories of the places, people and events that give it meaning – engender a reckoning within the tangled roots and fragile bonds of family. - from Goodreads

In The Door-Man, Peter M. Wheelwright takes the true story of what happened in the town of Gilboa, New York and interweaves it into a multi-generational story while also reflecting on the fleeting nature of life and where we all come from.  While I did have some issues with this book, there were also things to enjoy.
In the early 20th century, the town of Gilboa was chosen as the site of a new reservoir that would feed into the water system of New York City.  Fossils of an ancient forest were discovered during the construction, but it wasn't enough to stop the reservoir and the town was ultimately flooded, forcing the relocation of many families.  The story follows three generations of local families as their histories intermingle and secrets are discovered.
While I enjoyed Wheelwright's writing, the story was quite a bit more "literary fiction" than I typically read.  There were several places in the narrative where I felt like the commentary was too much for me to understand or detracted from the story.  There were hints of secrets and mysteries and I think for me the story could have worked much better if those angles were played up a bit more.
I enjoyed the way Wheelwright mixed fact and fiction; the book made me want to know more about what happened in Gilboa.  The parts of the story that took place there were really interesting.  There were a lot of characters to keep track of, but it was intriguing to learn about the different families, how they interacted with each other, and how their identities were revealed.  I also liked how the story moved back and forth in time; it added a little bit of suspense.
3 stars