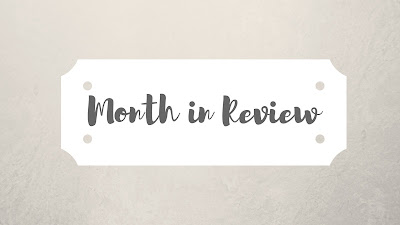 How are we already done with January?  The month seemed to fly by, despite the fact that I rarely left the house for most of it!  Tom went back to work, but his company had pushed back their reopening plans, so he mostly worked from home.  He had to "punch in" two days a week, but since there's a location only a mile from our house, he would go there, punch in, and come right back home.  I had a couple doctor's appointments, so it was nice that he was home and could watch Henry.
Speaking of Henry, he's now two months old - I can't believe it!  The changes in him seem to come so fast - literally one day he no longer fit in newborn diapers and clothes.  He really focuses on us when we're talking to him and will follow a toy from side to side.  The best part has been the "real" smiles and giggles.  He also likes to try to mimic us when we make animal noises at him!  I'm trying to introduce more books to him; he's obviously still too little for most things, but he's enjoyed looking at the pictures of animals in his black-and-white board books.
We were able to spend some time with family this month, too.  All the grandparents came for visits, and we saw my mom several times.  It's been so nice having her close; she can see Henry practically whenever she wants!  We also celebrated my niece's birthday with a small party.  We took a trip to Barnes & Noble and she picked out some new books.  It's hard to believe she's 6 already!  She held Henry for the first time and it's so cute to see how gentle and loving she is with him.
The Books