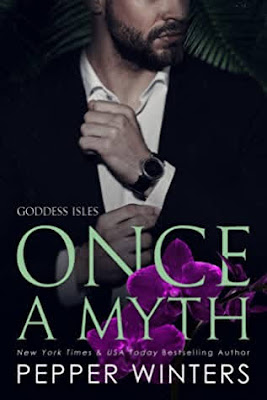 Basically since the pandemic began, I've found myself drawn to romances more than normal.  I don't know if it's the happily ever afters or the generally light tone, but I've really been enjoying them.  For this edition, I've decided to branch out beyond the contemporary romances I've been reading and try a new-to-me sub-genre - dark romance.  Dark romance is - no surprise - romances with darker themes, morally grey characters, and/or dangerous situations.  These books often come with content warnings because they can explore triggering topics such as kidnapping, captivity, BDSM, abuse, and dark fantasies.  These are definitely for adults only.  One of my favorite book bloggers, Stephanie at Bookfever, has mentioned Pepper Winters as one of her go-to dark romance writers, so I decided to try out her 2020 novel Once a Myth.
Eleanor is backpacking with her new boyfriend when she is kidnapped by sex traffickers.  She is purchased by Sully Sinclair, a man who owns an island that caters to even the most extreme fantasies.  While Sully normally doesn't partake of his own "goddesses," for some reason Eleanor intrigues him and he finds himself jealous that she'll be with the other guests instead of him.  I also found myself intrigued by Eleanor - the way she is able to remain mostly clear-headed about her situation, showing a strength that most people couldn't.  Although she lashes out a few times, it's understandable considering the horrific circumstances she finds herself in. It was Sully I had the most issues with it.  I understand that he's not going to be a perfect character, but I really found him to be pretty despicable.  I feel like Winters tried to add minor elements to humanize him and balance his dark side, but for me they didn't work.  At the end of the day, he still feels justified buying women and forcing them into sex work.  His feelings toward Eleanor included too many descriptions of using her and destroying her.
The pacing of the book didn't work for me.  It's a relatively short book that takes place over only a few days, but it felt like nothing really happened.  Eleanor learns more about her new home, and she and Sully dance around each other, but many scenes felt so dragged out at the expense of moving the plot forward.  This is just the first book in the series, so I'm guessing this was a set-up to establish the characters and world, and the action will ramp up in later books.  There are plenty of steamy scenes, although less actual sex than I was expecting and they were twinged with violence.  I did enjoy the writing, however.  I think Winters did a great job elevating what could easily devolve into something too simplistic and base, and I was really able to get inside Eleanor and Sully's heads.  Although I can see the appeal of this genre, I think the violence and grit was a bit too much for me!
Posted by Angela at 3:00 AM

Email ThisBlogThis!Share to TwitterShare to FacebookShare to Pinterest
Labels: romance, Try it