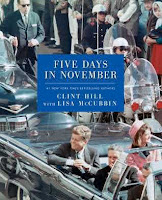 Five Days in November by Clint Hill with Lisa McCubbin (2014)
The story of the days surrounding the assassination of President John F. Kennedy, as told by the Special Agent in Charge of Mrs. Kennedy's Secret Service detail, Clint Hill.  Although this book isn't very long, it is a very detailed account of the President's trip to Texas that ended in tragedy.  Agent Hill, even 50 years later, remembers incredible details from the trip, from JFK's last interaction with his son to Jackie's poise under immense pressure.  Hill's account is succinct yet emotional and is accompanied by many photographs from the time, which greatly added to the story.  I could feel Hill's admiration for the First Lady in every word of his account, and the shock of the entire nation really comes through.  A truly unique perspective on a defining moment in America's history.  5 stars

And They Called It Camelot by Stephanie Marie Thornton (2020)
A story of the life of Jackie Kennedy, from the early 1950s through the late 1970s, focusing on the many public faces she showed and how she tried to forge her own identity.  I've always been fascinated by Jackie and JFK, and I thought this was a fantastic addition to the historical fiction genre.  Thornton's writing is so lovely and elegant, it really brought Jackie's voice to life.  Although there are a lot of events that I knew about, there were quite a few I didn't. I liked how Thornton included information about Jackie's preservation efforts.  Her many roles as a politician's wife, a mother, and a public figure in general were all given a place to shine, and I really feel like we were able to get inside her thoughts and experience how she really might have felt about certain things, in particular JFK's infidelities.  Thornton portrays Jackie as a complex and intelligent woman, and I thoroughly enjoyed this book.  4 stars
* This post contains affiliate links; I earn a small commission on qualifying purchases, at no cost to you.
Posted by Angela at 3:00 AM