Thank you to Trish Collins at TLC Book Tours for inviting me to be a part of the blog tour for Le Deal by J. Byrne Murphy!  I was provided with a free copy of this book in exchange for an honest review. 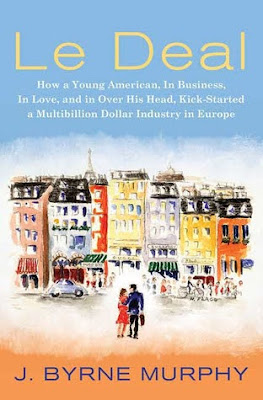 Le Deal: How a Young American, In Business, In Love, and in Over His Head, Kick-Started a Multibillion Dollar Industry in Europe (affiliate link)
J. Byrne Murphy
Originally published August 19, 2008

Le Deal is an adventure story involving raw entrepreneurship, high-level politics, and a young American family in foreign lands. It is the true story of Byrne Murphy, a businessman who abruptly moves to Paris with his wife and baby daughter in a quest to reignite his career and his fortunes. He quickly finds himself up against strange and powerful forces for which he is ill prepared.

Just days after landing in France, Byrne reads that the newly installed prime minister has declared a moratorium on all new retail development, apparently snuffing out Byrne’s proposed new venture---discount fashion malls---before it’s even started. He and his company will engage in a mano a mano struggle with the prime minister (which reaches all the way to France’s Supreme Court); encounter a ruthless political ambush in Germany by the soon-to-be chancellor, Gerhard Schroeder; and face a threatening (“Is this the Mafia?”) would-be partner in Italy. Counterbalanced against these are a series of mostly charming encounters with nearly all members of the British Royal Family, capped off by a tour with Her Royal Majesty, Queen Elizabeth II, which nearly ended in a royal embarrassment of epic proportions.

Byrne and his wife, Pamela, experience the joys and risks of living and growing their family in foreign lands. From proposals for dalliances to a harrowing experience with a local and dangerous disease during pregnancy, they are reminded time and again that surprises can be ever present in foreign cultures.

Over eight years the company (McArthurGlen Europe) grew from nothing to generating approximately a billion dollars in sales from 11 centers across Europe. Those efforts created nearly 8,000 jobs, opened 1,500 stores featuring 500 brands, attracted nearly 40 million shopping visits per year, and spawned an array of competitors. In short, an industry.

Along the way, the author learns what he, and Americans in general, do and do not know about life beyond our borders. The book ends with a message about the need for twenty-first-century Americans who work in international affairs to truly take “context” into account; to realize, in our quest to accomplish more in less time, that investing the time to understand the nuances of foreign cultures with which one may be working is a key to prospering in this multicultural, polyglot, interconnected, globalized world. - from Goodreads

Looking for new business opportunities in the early 1990s, J. Byrne Murphy joined McArthurGlen to help them launch their designer outlet model in Europe.  Since it had been so successful in America, he assumed the same would follow in Europe, but he and his team ran into more problems than they ever dreamed.
What I didn't love about this book:
What I enjoyed about this book:

If you have an interest in business, and particularly what it's like to start one in a  foreign country, I'd highly recommend this book!  4 stars