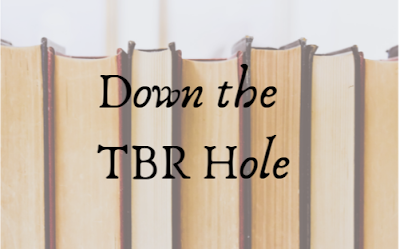 Down the TBR Hole is a feature created by Lost in a Story (although the blog seems to be down).  I've seen it on a few other blogs and thought I would try it out myself!  It seems like a really good way to cull your TBR of those books you're no longer interested in.  So, how does it work?

Here are the books I'm looking at this time:

The Other People by C.J. Tudor
After his daughter disappears, a man never gives up hope finding her, leading him to a group called The Other People.  I'm just not super into this - pass!

The Poison Garden by Alex Marwood
A young woman raised in a cult finally escapes, but now she's alone, expecting a baby, and doesn't know who to trust.  This one isn't grabbing me, either - pass!

The Camera Never Lies by David Rawlings
Daniel is a successful marriage counselor and author, but behind the scenes, his own marriage is falling apart and his daughter is drifting away.  He inherits a camera, but the pictures come out strange, and he finds himself having to choose between keeping his secrets or saving his family.  This sounds kind of intriguing, but the reviews seem mixed - pass!

Tsarina by Ellen Alpsten
After the death of Peter the Great of Russia, his wife Catherine assumes power.  This historical fiction novels tells the story of her life from her humble beginnings to her rise to power.  Love the sound of this - keep!

The Night Swim by Megan Goldin
The host of a true crime podcast investigates in a small-town rape trial, and the mystery of what really happened to her sister 25 years ago re-emerges.  This sounds really good - keep!

The Paragon Hotel by Lyndsay Faye
It's 1921 and after fleeing Harlem, Alice finds refuge in the Paragon Hotel in Portland.  However, racial tensions are taking over the city.  I'm just not really interested in this one anymore - pass!

The Last Day by Andrew Hunter Murray
In a dystopian near-future, the Earth has stopped rotating, leaving half the world in cold darkness and the other in blinding sunlight.  Nations fight for survival while a lone scientist comes across a secret that threatens all of humanity.  I can't resist an "end of the world" type novel - keep!
Have you read any of these?
Posted by Angela at 3:00 AM

Email ThisBlogThis!Share to TwitterShare to FacebookShare to Pinterest
Labels: reading