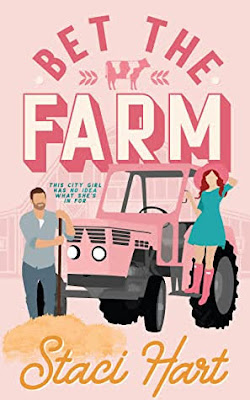 Because now their hearts are on the line, and the farm won’t be the only casualty if they fail. - from Goodreads

Thank you to the author for providing me with a complimentary ARC of this book.  All thoughts are my own.
After her grandfather Frank's death, Olivia returns to the California dairy farm where he raised her.  She wants to help turn it around, but she'll have to deal with farmhand Jake, who inherited half the farm.  He wants her to leave, but she convinces him to give her one summer to prove herself.  Can they overcome their differences to save the farm (and maybe admit their growing attraction to each other)?
I have to admit, this story was less rom-com than I was expecting - don't get me wrong, there was witty banter and plenty of cute moments, especially involving some adorable animals.  But there was also a depth to the book that I appreciated.  Olivia feels guilty for leaving the farm (and her grandfather) years before to start a career in New York.  Jake owes so much to Frank, who was more than just a boss to him and helped him through some difficult periods in his life.  A desire to make Frank proud motivates both Olivia and Jake, and there were so many emotional moments as they explore their feelings about his death.
I loved both Jake and Olivia.  Olivia is the ideas girl - she has so many thoughts on how to help generate more income for the farm (I wish I could follow her Instagram!).  She can be a bit impulsive, but she's so optimistic and sunny; she wants to see the best in everyone.  Jake is quieter and more contemplative.  He can be rigid, but it comes from a place of trust and loyalty.  They balance each other out, even if they can't see it!  I was rooting for them from the beginning; their romance is a slow-burn one, but so satisfying.
Hart's writing is stellar as always; her descriptions paint such a vivid picture.  I loved the farm and small-town feeling surrounding it.  There are some really great side characters that helped round out the story.  Overall, if you love slow-burn enemies-to-lovers romances, cute farm animals, and small town settings, give Bet The Farm a try!
4 stars
Posted by Angela at 3:00 AM