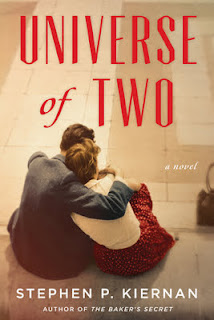 Universe of Two by Stephen P. Kiernan (2020)
I received this book for free from Goodreads giveaways.
Universe of Two is a fictionalized account of the life of mathematician Charlie Fisk, who built the detonator for the atomic bomb during WWII's Manhattan Project.  The story follows Charlie and his wife Brenda as they meet in Chicago, move to New Mexico, and then try to move on from Charlie's work in Los Alamos.   The book is told in alternating chapters between Charlie's 3rd-person POV and Brenda's 1st-person POV.  The story moved a bit slowly for me, particularly Charlie's chapters, but there was so much history and emotion caught up in the words.  When Charlie realizes what he's actually working on, you could really feel his reluctance to finish the project, how he wrestled with what he was doing, and later, his guilt.  I enjoyed Brenda's chapters because they are written as if she is older and looking back on her earlier life.  She is able to see mistakes she made and how she wishes she acted differently in certain situations.  I wanted more of Brenda and Charlie's life together after the war.  I felt like this part was rushed through, and more of the story should have been devoted to how Charlie, especially, worked through his feelings on his role in the dropping of the atomic bomb on Japan.  4 stars 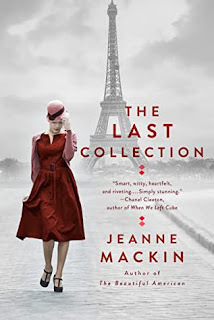 The Last Collection by Jeanne Mackin (2019)
I received this book for free from Goodreads giveaways.
A short visit to France to see her brother Charlie turns into something more when American widow Lily becomes embroiled in the feud between designers Coco Chanel and Elsa Schiaparelli, on the eve of WWII.
I can never resist WWII historical fiction, and this was a unique take on the subject.  It takes place mostly in Paris, in the late 1930s/early 1940s.  German soldiers are already in the city, and war may be coming to France.  With this background, Mackin focuses the story on Lily, widow and artist.  Lily begins working for Schiaparelli, whose designs are whimsical and edgy, but she also has a lot of interaction with Chanel, whose designs are more classic and muted.  I really feel like I got to know these real-life fashion icons.  In addition to these figures, the story had a lot of wonderful elements and themes - politics, art, clothing design, forbidden love - all woven together in one cohesive story.  Although the story had a lot of somber moments, the writing felt very vibrant, leaping off the page and compelling me to read on.  4 stars
* This post contains affiliate links; I receive a small commission on qualifying purchases, at no cost to you.
Posted by Angela at 3:00 AM