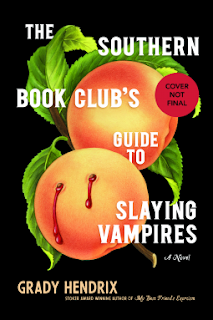 In an upscale neighborhood in South Carolina, a monster is stalking the community - and the only people that may be able to stop him are the members of a local book club.

Normally I'm not drawn to horror, but the premise of a book club saving the neighborhood was too good to pass up!  Patricia is our main character - a former nurse, she's now a stay-at-home wife and mother.  Her one escape is a book club where the ladies read true crime and suspense novels.  One day a stranger, James, moves to the neighborhood.  At first, Patricia is attracted to him, but she soon realizes that there's some weird stuff going on - she thinks he might be a vampire.  I loved Patricia - at times I felt bad for her because no one would believe her, but she never gave up.  She's smart and determined.  There were some truly gruesome scenes in this book, but I honestly couldn't stop reading - I loved the themes of friendship and female strength and the campy, almost retro feel to the story.  4.5 stars 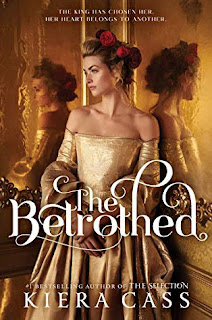 The Betrothed by Kiera Cass

The original trilogy of The Selection series is one of my favorites, so I was really looking forward to Kiera Cass' new book - unfortunately, it was a big miss for me.

Lady Hollis is sure that a proposal from King Jameson is coming soon, but when a stranger from a neighboring kingdom arrives seeking sanctuary, she's drawn to him instead.  I don't even know where to start with this one - Hollis is so shallow and immature, I'm not sure what the king sees in her, although he's not a prize himself.  She seems content with her life, so when she meets Silas and within days falls in love and runs away with him, it felt like insta-love at its worst.  The world-building is almost non-existent - it's painted in such broad strokes that it could be taking place anywhere at any time.  It also felt like there was no plot to this story - the whole time I was listening to it, I was wondering what the point of it was.  Cass tries to inject some drama near the end of the story, I guess to set it up for the next book, but I don't think I'll be reading it.  2 stars
Posted by Angela at 3:00 AM