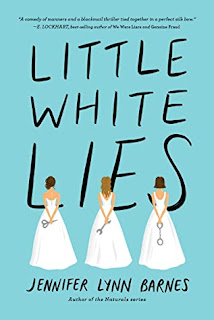 Eighteen-year-old Sawyer Taft and her mom have been estranged from their family her whole life - until her grandmother approaches her with an offer.  She'll pay for Sawyer's education, if Sawyer joins her high-society life and completes debutante season.  Sawyer becomes friends with some of the other debutantes, but also becomes involved in more than one scandal.

For some reason I thought this was going to be kind of a fluffy read set in the world of debutantes, with pretty dresses and good manners.  It definitely was not, but I still enjoyed it!  Our main character Sawyer is a reluctant deb - she's gritty and sarcastic.  Her main motivation for accepting her grandmother's offer is to find her biological dad, thinking it might be someone in the society set.  Although we see the girls attend a few deb events, it's more about what happens between those scenes and the trouble the girls (and their elders) get into.  So many scandals, so many secrets!  I loved the snappy writing, the quick pace, and all the banter.   There were a lot of characters to keep track of, and how they're all related to each other, but it was a fun ride!  4 stars 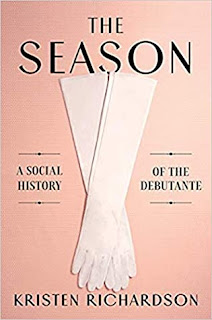 The Season by Kristen Richardson (2019)

In The Season, Kristen Richardson explores the history of the debutante ritual, from its beginnings in England to its spread to the American colonies and beyond.

Although rather short, I thought this was an interesting social history and look into a world that most people will never experience.  Richardson looks at how initially the debutante ritual was a way for young women to find husbands as they were introduced into society and later began to include a charitable element.  I enjoyed the exploration of the ways the tradition differed between the American north and south in the antebellum period and late 19th century.  I also enjoyed her look at current trends in a couple American cities.  I did think she got a little snarky when describing her experience attending a debutante ball; she herself refused the opportunity, and I kind of felt like she was judging others for choosing to do it.  3.5 stars
Posted by Angela at 3:00 AM