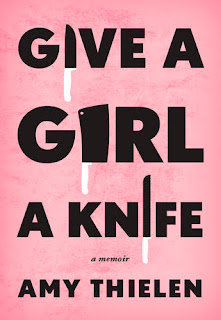 In Give a Girl a Knife, chef Amy Thielen recounts her many years cooking in fine dining restaurants and the time she spent living in a rural area.  I wanted to love this memoir, but unfortunately it fell flat for me.

What didn't work for me: Although it's obvious that Thielen is a gifted writer, much of the book felt overwritten and too flowery for my taste.  The narrative wasn't in a chronological format, so sometimes it was hard to place where she was in her career and life.  Some of the anecdotes she told felt extraneous.  At the risk of sounding like a jerk, I didn't think she came across that well as an employee, either.  She skipped around from job to job, was often late or disinterested, and also seemed to spend a lot of time not working at all.

What worked: I liked the juxtaposition of working as a chef in high-end NYC restaurants with the time she spent at a cabin in the middle of nowhere, cooking from her own garden.  I also enjoyed when she spoke of her mother and grandmother and how they inspired the chef she later became.  You can tell that Thielen loves food, the act of cooking, and using food as a way to connect to people and her heritage.  3 stars 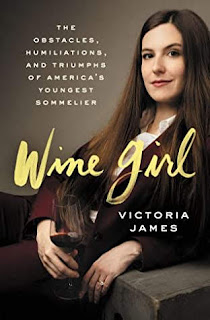 In Wine Girl, Victoria James recounts how she overcame her troubled childhood to become a highly successful sommelier in some of New York City's Michelin-starred restaurants.

From a young age, Victoria showed herself to be extremely intelligent and hard-working, and also very interested in hospitality.  This led her to become interested in wine, which she parlayed into a career as a sommelier, helping patrons make the best food and wine pairings and building up the cellars at the restaurants she worked at.   Both her age and the fact that she's a woman were obstacles that she had to continually overcome, and I think James did a great job showing how unglamorous the restaurant industry can be.  There were so many ugly encounters, on top of the extremely long hours and often low pay; it makes you wonder if it would all be worth it, but over the years James came up with coping mechanisms.  I was also amazed at the sheer amount of knowledge one has to have to become a sommelier.  4 stars
Posted by Angela at 3:00 AM