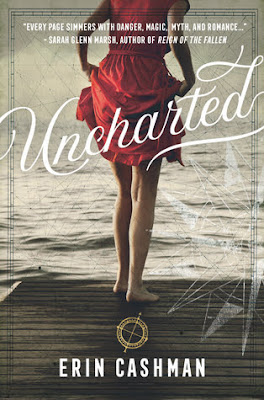 
Seventeen-year-old Annabeth prefers the fantasy of her books and paintings to reality—because in reality, her mom is dead, and it was all her fault. When she accompanies her father to the funeral of some family friends who drowned, she’s surprised to find her grief reflected in the face of Griffin Bradford, the son of the couple who died. Griffin is nothing like the carefree boy she once knew. Now he’s irritable, removed, and he’s under police investigation for his parents’ deaths.

One night following the memorial service, Annabeth’s dad goes missing in the woods, and she suspects Griffin knows more about the disappearance than he’s letting on. He refuses to answer her questions, particularly those related to the mysterious “expedition” his parents took to Ireland, where they went missing for seven months.

Annabeth fears her father isn’t lost, but rather a victim of something sinister. She launches her own investigation, tracing clues that whisper of myth and legend and death, until she stumbles upon a secret. One that some would die to protect, others would kill to expose—and which twists Annabeth’s fantasy and reality together in deadly new ways. - from Goodreads

Annabeth and her father are visiting family friend Griffin Bradford, whose parents have recently died, when her father disappears from the Bradford manor.  While searching for him, Annabeth learns that her father and his friends may have been involved in something much more mysterious and fantastical than she could have ever imagined.

I really wanted to love this book - the premise sounds so intriguing, particularly the way myths and legends are involved.  Unfortunately, this one let me down a little.

Some things that didn't work for me:

- The romance.  I really could have done without it.  It's just another example of when the main character can't get over how cute the love interest is while people are being kidnapped or murdered.  And Griffin was the stereotypical YA "hero" - thinking he's always right, not telling Annabeth things under the guise of trying to protect her.
- The pacing.  It took SO LONG for things to start happening, and then it was just a lot of repetitiveness of Annabeth trying to figure out what this mysterious "expedition" entailed.  There were bursts of action and conflict, but I felt like they were resolved too easily.
- Annabeth.  I liked certain things about her (she holds onto a lot of guilt surrounding her mother's death, she had a mental break at one point), but there were just trivial things that annoyed me.  Like, way too many mentions of how much she loves coconut iced coffee and desserts.  It just made her seem shallow.

But, there were some things I enjoyed:

- I think the blurb leaves out a big element of the novel, which is the group called the Magellans, a club started by Annabeth's father and his friends in college in order to explore and research various legends and myths around the world.  The idea behind this group was so cool, and I liked the way it played into the story.  A mysterious island, genetic experiments - I wanted more of it!
- It was a very quick read, even though it's not a short book.