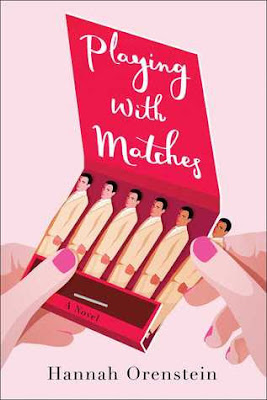 
In the tradition of Good in Bed and The Assistants comes a funny and smart comedy about a young matchmaker balancing her messy personal life and the demands of her eccentric clients.

Sasha Goldberg has a lot going for her: a recent journalism degree from NYU, an apartment with her best friend Caroline, and a relationship that would be amazing if her finance-bro boyfriend Jonathan would ever look up from his BlackBerry. But when her dream career falls through, she uses her family’s darkest secret to land a job as a matchmaker for New York City’s elite at the dating service Bliss.

Despite her inexperience, Sasha throws herself into her new career, trolling for catches on Tinder, coaching her clients through rejection, and dishing out dating advice to people twice her age. She sets up a TV exec who wanted kids five years ago, a forty-year-old baseball-loving virgin, and a consultant with a rigorous five-page checklist for her ideal match.

Sasha hopes to find her clients The One, like she did. But when Jonathan betrays her, she spirals out of control—and right into the arms of a writer with a charming Southern drawl, who she had previously set up with one of her clients. He’s strictly off-limits, but with her relationship on the rocks, all bets are off. - from Goodreads

Sasha wants to be a writer, but when her internship doesn't turn into a job after graduation, she applies to become a matchmaker at Bliss.  Even though she's only 22 and has only been in one serious relationship, she's actually not too bad at it, until she starts falling for a recruit for one of her clients, which is against the rules.  Will she put her job in jeopardy for love?

One of the things I've seen lamented about around the blogosphere is the lack of decent New Adult novels - those novels somewhere in between YA and adult which feature college students or those just out of college - that aren't just centered around sex.  The main character in Playing With Matches is a recently-graduated young woman, and yes, she is a matchmaker and in two relationships throughout the book, but there's so much more to it than that.  Finding a job when your internship doesn't work out, maintaining friendships, and working towards your ultimate passions were all major parts of the story.

I enjoyed the relationship between Sasha and her best friend/roommate Caroline, and I wish there had even been more of their friendship in the book.  It's not perfect, and I liked that Orenstein touched on how friendships can change - Caroline is kind of just meandering along, she has a job but not a career, she can't seem to find a steady relationship, while Sasha is out hustling at work, working on her writing, and seriously dating.  It caused some touchy but real moments between them.

The matchmaking aspect of the book was also really fun.  Seeing what different people thought was important in relationships and how modern dating is aided by apps and social media was interesting.  I think Orenstein made the point well that having a list of attributes you want in a partner is important, but sometimes you just have to go with your gut.

The book was very quick and easy to read, perfect for summer or vacation fluff reading.  I was bothered by how easily Sasha broke the biggest rule at her new company when she started dating a recruit, and the ending came on way too quick and neatly wrapped up for me, but if you're a fan of Lauren Weisberger's The Devil Wears Prada or Erin Duffy's Bond Girl, I think you'll enjoy this one.