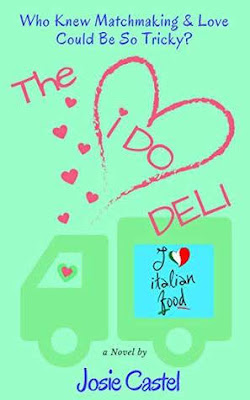 
Kid Cafarelli is in love, and in her traditional Italian Catholic family that’s a big problem. By day she works behind the counter of her family’s New York delicatessen with her three older sisters, Teresa, Rose and Grace. By night she sneaks away to a forbidden French cooking class, led by the mouth-watering Jewish chef Marc Ratzenberger. Watching over the Cafarelli clan is her widowed father Carmine, who hates everything French except for the Statue of Liberty, which he insists was made with Italian steel. He also insists his girls marry in birth order, leaving Kid stuck behind Teresa the mouth, Rose the nerd, and Grace the prude. And Carmine guards his girls like a meatball guards spaghetti. But from New York to Italy Kid is determined to do whatever it takes to get her man and find her sisters true love. Will her search for three suitable husbands, and surviving Carmine, prove to be too much for the matchmaking rookie? Or can she make the impossible happen? - from Goodreads

I received a copy of this book for free from the author in exchange for an honest review.

Kid Cafarelli is part of a close-knit Italian family, so when she starts taking a French cooking class, she has to keep it a secret from her father.  Then she falls in love with and gets engaged to the course's instructor, Marc.  The problem?  Her father insists that his daughters get married in the order they were born, Kid is the youngest, and none of her sisters are in a relationship.  Can Kid help her sisters find husbands and ensure that her father accepts her new love?

My favorite thing about this book was the Cafarelli family.  Carmine is a widower with four daughters, and they all work together in the family deli.  I loved how close they all were and how much they love food and each other.  Carmine is sweet, although way too overprotective sometimes; his daughters are so sheltered that none have even had their first kiss, and the oldest is 33!  But even though Carmine could be very stubborn, he could also be open-minded when just given a chance.

The Cafarelli sisters represent everything you want in a sibling relationship; they joke around with each other good-naturedly, and it was funny to see them working together to deceive their father.  I thought the characters were a little one-dimensional, though; each sister had one major trait that distinguished her from the others.  I wanted to know more about them.

The plot moved fairly quickly, and I wish each sister's relationship had been fleshed out a bit more.  It didn't seem to take long for them to all find boyfriends, so the trip to Italy in the second half of the book became more about Kid and Marc's relationship and how to get Carmine on board with it, when I thought the story would be more about the matchmaking.

I thought the writing was very simplistic, though conversational and easy to read.  The feel of the book was often a little too saccharine and chaste for my taste, but I think many others would enjoy it.  Lastly, my copy had quite a few grammatical errors; there seemed to be a lot of missing commas.