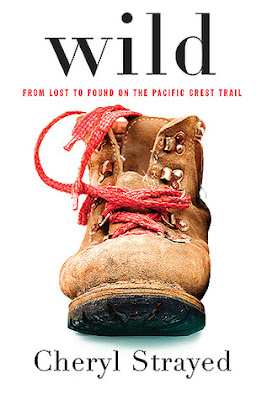 Wild: From Lost to Found on the Pacific Crest Trail

At twenty-two, Cheryl Strayed thought she had lost everything. In the wake of her mother’s death, her family scattered and her own marriage was soon destroyed. Four years later, with nothing more to lose, she made the most impulsive decision of her life. With no experience or training, driven only by blind will, she would hike more than a thousand miles of the Pacific Crest Trail from the Mojave Desert through California and Oregon to Washington State — and she would do it alone.
Told with suspense and style, sparkling with warmth and humor, Wild powerfully captures the terrors and pleasures of one young woman forging ahead against all odds on a journey that maddened, strengthened, and ultimately healed her. - from Goodreads

I don't usually read memoirs, so I was pleasantly surprised that this memoir read more like a novel than non-fiction.  I had to remind myself several times during reading that this was a true story, so it's hard for me to critique some of the events in this book without feeling bad about ragging on Strayed's real life.  For example, I feel immense sympathy for the loss of her mother; they had a close relationship and Strayed was her caretaker at the end.  But I dislike that she used her mother's death to justify cheating on her husband and eventually destroying her marriage with her affairs and drug use.  Strayed and her husband married very young, and she also uses this as an excuse to later leave him, despite stating many times how good of a man and husband he was and how they remained close friends even after their divorce.  I felt she purposefully sabotaged her marriage.  In any event, Strayed eventually decided that hiking the Pacific Crest Trail by herself would give her a chance to reflect upon her life.

Strayed is honest about her mistakes on the Pacific Crest Trail, although with a bit more research and training before starting the hike she probably could have avoided many of them (like breaking in her boots and packing a lighter bag).  I was heartened to read that even though she wanted to do the trek alone, she came across several other backpackers along the way, most of whom seemed very kind, gave her good advice, and provided companionship when she needed it.

I enjoyed her descriptions of the Trail, the mountains, deserts, lakes.  She spent an awful lot of time recounting her stays at various checkpoints off the trail, which I could have used less of.  In the end, she finishes the trail at the Bridge of the Gods in Oregon.  Strayed doesn't articulate very well what the hike taught her about herself, or maybe I just didn't understand it, so the abrupt ending didn't really sit well with me.

As someone who loves the outdoors, there was one quote in the book that stood out to me, when Strayed is discussing long-distance hikers and why they do it:

It had only to do with how it felt to be in the wild.  With what it was like to walk for miles for no reason other than to witness the accumulation of trees and meadows, mountains and deserts, streams and rocks, rivers and grasses, sunrises and sunsets.  The experience was powerful and fundamental.  It seemed to be that it had always felt like this to be a human in the wild, and as long as the wild existed it would always feel this way.

3 stars - I would recommend this to fans of memoirs.