Review: The Song of Hartgrove Hall 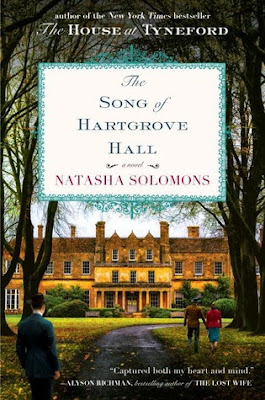 The Song of Hartgrove Hall

Natasha Solomons’s breathtaking new novel has it all: a love triangle, family obligations, and rediscovering joy in the face of grief, all set against the alluring backdrop of an English country estate.

It's a terrible thing to covet your brother’s girl

New Year’s Eve, 1946. Candles flicker, a gramophone scratches out a tune as guests dance and sip champagne— for one night Hartgrove Hall relives better days. Harry Fox-Talbot and his brothers have returned from the war determined to save their once grand home from ruin. But the arrival of beautiful wartime singer Edie Rose tangles the threads of love and duty, and leads to a devastating betrayal.

Fifty years later, now a celebrated composer, Fox reels from the death of his adored wife, Edie. Until his connection with his four-year old grandson - a piano prodigy – propels him back into life, and ultimately to confront his past. An enthralling novel about love and treachery, joy after grief, and a man forced to ask: is it ever too late to seek forgiveness? - from Goodreads

I really wanted to love this book.  It had so many elements that I normally love: it takes place in England, there's a huge country estate, dual time lines, including one just after World War II.  And it was good - I finished it in about two days.  It was just wasn't great like I wanted it to be.

The Goodreads synopsis talks about a devastating betrayal.  There was such a long, slow build-up to the confrontation between Edie, Fox, and his brother, and when it finally happened, it was really anti-climactic.  And where was the fall-out from this betrayal?  The reader never really finds out how Edie and Fox were affected by their decision as the book skips over their entire married life, picking up in a present-day time line after Edie has passed away.  Likewise, Fox seeking forgiveness from his brother almost comes as an afterthought near the ending of the book.

The character of Edie wasn't fully fleshed out; I never really got the sense of why this woman was so irresistible to both Fox and his brother.  Was it because of her fame and fortune?  Unfortunately, we don't get to know her very well.  I believed in Fox as a grieving widower in the present-day time line more than the younger version of Fox.  After spending 50 years with his wife, one can feel how lost he is without her, until he finds purpose again in his grandson, Robin.

Despite these issues, the writing is beautiful.  The descriptions of Hartgrove Hall and its surrounding lands are lush.  I could picture the house, once beautiful, then crumbling.  I felt how attached the Fox-Talbot brothers were to their home and loved the description of how they would take pieces of it, be it pressings of leaves and orchids or songs, to remember the estate by when they were away at school.

3 stars - Many readers will love this book; unfortunately, I wasn't one of them.
Posted by Angela at 8:00 AM