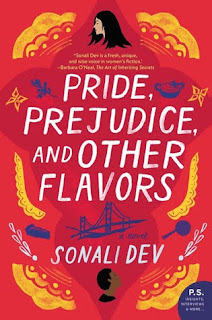 Pride, Prejudice, and Other Flavors by Sonali Dev (2019)
As much as I love P&P retellings, this one fell way short for me.  Trisha is a successful neurosurgeon who has been somewhat estranged from her family for almost 15 years.  DJ Caine is a chef whose sister is being treated by Trisha.  The two have their issues from the start, but might they be able to overcome their first impressions?  I did enjoy some things - I loved the culture and the food, and the way the author played with elements of the original story (the two leads are kind of swapped) without tying herself down with trying to incorporate everything.  Unfortunately, there was a lot I didn't like - first, the book was way too long (almost 500 pages!).  It could have easily been 100 pages shorter.  There was so much extraneous background information on so many of the characters.  I just didn't need it all.  I hated the way Trisha's family treated her.  They were basically gaslighting her for something that was in no way her fault (and it also happened when she was a teenager - they need to get over themselves).  The romance was lacking - I know P&P is a slow burn, but to not get a payoff on the romance until literally the last few pages in a book this long was frustrating.  Finally, the writing was very repetitive.  The author would constantly detail what the characters wanted to say in a heated conversation followed by what they actually said.  It was very confusing and I had to keep rereading sections to figure out what was actually happening.  2.5 stars 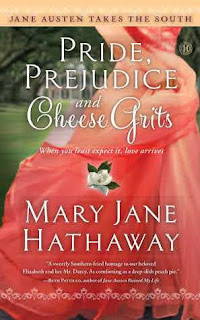 Pride, Prejudice and Cheese Grits by Mary Jane Hathaway (2013)
A modern take on Pride & Prejudice between two Civil War historians at a small Mississippi college.  Ransom and Shelby's first meeting doesn't go well after he writes a terrible review of her book in a national magazine.  Her blunt honesty and his stoic nature find them in one misunderstanding after another but they eventually get to know each other better.  Although I didn't love this book, I thought there were things to enjoy.  One thing I had an issue with was how nasty some of the characters were to Shelby, and it felt completely unwarranted.  Her department head is constantly finding ways to undermine her, for instance.  I also felt like there were scenes and plot threads that went nowhere.  But I did enjoy the way the author took elements of the classic novel and adapted them to a more modern setting.  She didn't use every character and situation, but the ones she did are easily identifiable.  I also liked the college setting and the fact that the two main characters are historians.  The little touches of Southern history were really interesting.  I didn't realize this book was Christian fiction, so the story was fairly clean and the romance very simplified, but it worked here.  3.5 stars
* This post contains affiliate links; I earn a small commission on qualifying purchases, at no cost to you.
Posted by Angela at 3:00 AM