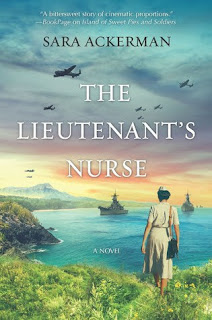 The Lieutenant's Nurse by Sara Ackerman (2019)
Nurse Eva Cassidy is on a ship bound for Hawaii when she meets Lieutenant Clark Spencer.  They each have their secrets but the attraction is undeniable.  Circumstances pull them apart when their ship docks, but the surprise attack on Pearl Harbor only days later causes their paths to cross again.
I love stories set during World War II, and the concentrated timeline of this story (set in the days before and after the Pearl Harbor attack) really highlighted the intensity of this event.  Eva is a really interesting character; she's running away from something, but we don't find out what that is until later in the story.  She's torn about leaving her sister behind, but she knows she needs a fresh start.  Watching her find new companions in the other military nurses was great.  A major crux of the book is whether it was known that the Japanese were planning on attacking the United States or if it was a complete surprise.  Lt. Spencer discovers information about the movements of the Japanese, but what did his superiors do with the information?  Ackerman's descriptions of the attack and the aftermath drew me in, and I could really feel the heartache, pain, love, and courage felt by the characters.  This book had a lot of wonderful elements and is a great addition to the WWII historical fiction genre.  4 stars 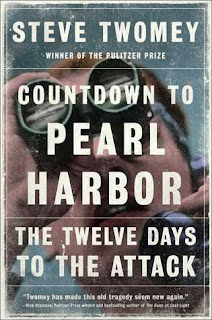 Countdown to Pearl Harbor: The Twelve Days to the Attack by Steve Twomey (2016)
In Countdown to Pearl Harbor, author Steven Twomey explores the 12 days (and beyond) leading up to the attack on Pearl Harbor and the warnings and clues that were possibly missed.
It is clear that Twomey did an extensive amount of research for this book.  Chapters alternately showed POVs from Washington, Hawaii, and the Japanese fleet.  The writing was very dense, unfortunately, and it took me awhile to get through.  There are a lot of players to remember, and although the book is set up chronologically, it doesn't always follow that.  But, the subject matter is fascinating.  Twomey looks at individual events that together added up to a disaster - a poorly worded memo, the mistaken belief that Pearl Harbor was too shallow for torpedoes, the assumption that "missing" Japanese aircraft carriers were still in Japan.  Perhaps the biggest issue of all was the underestimation of the Japanese military and thinking they would never attack America directly.  3.5 stars
* This post contains affiliate links; I earn a small commission on qualifying purchases.
Posted by Angela at 3:00 AM