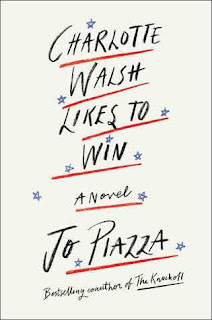 I'm not usually one for political novels, but I actually really enjoyed this story about Charlotte Walsh, a Silicon Valley COO who returns to her home state of Pennsylvania to run for Senate.  There aren't enough women in politics in general, so to have a book about the behind-the-scenes of a female candidate's campaign is refreshing. It was interesting to see what kinds of things the media focuses on for female vs. male candidates.  Charlotte's clothes, and especially shoes, are constantly critiqued, and pregnancy speculation abounds.  Her husband was so hot-and-cold; one minute very supportive, but also always reminding her that he didn't choose this campaign life.  There were a few family secrets that Charlotte was afraid would come out and derail her campaign.  One involved her brother Paul; he was just the most despicable character.  It never occurred to me that Charlotte was also hiding a big secret.

I've read a couple of Jo Piazza's books and I always enjoy her writing.  It flows nicely and is easy to read.  The pacing was great, and I liked that some of the chapter titles included how many more days until the election.  If you dislike open endings, this may not be the book for you; I, however, appreciated that the reader can imagine all the possibilities of what may have happened on election night and after.  4 stars 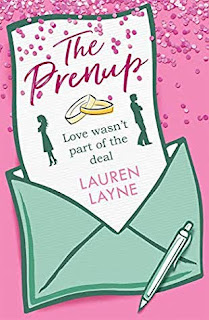 Charlotte wants financial independence by way of her family trust and Colin needs a green card; their solution is to marry each other, after which she moves across the country and they never speak again.  Ten years later, Colin wants a divorce, but there's a catch in their prenup - they must live together for three months first.  Charlotte moves in with Colin, but after really getting to know each other, is a divorce something they actually want?

I really wanted to like this story; I was rooting for two people who marry for convenience to discover that they're actually perfect for each other.  Unfortunately, it was just kind of a meh read for me.  For most of the book, Charlotte is so whiny and immature; she's all like, "Why does Colin hate me??  Wah!"  For his part, Colin is like a robot.  I never really got a good read on him.  I wish Colin had come right out at the beginning and said why he wanted a divorce; I mean, it was a darn good reason, although Layne twisted it enough so that we knew immediately it would never work.  While the romance didn't work for me at all, I did enjoy Charlotte's story outside of the marriage issue.  Her move back to NYC gave her some perspective to see that she wanted to make changes in her life, that it was time to grow up.  She did evolve by the end of the book, and I appreciated that.  3 stars
Posted by Angela at 3:00 AM