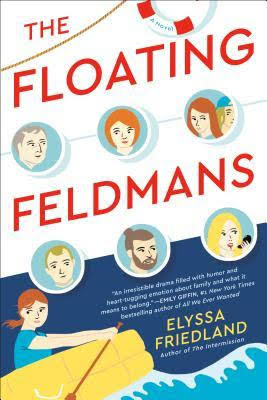 
Sink or swim. Or at least that's what Annette Feldman tells herself when she books a cruise for her entire family. It's been over a decade since the Feldman clan has spent more than twenty-four hours under the same roof, but Annette is determined to celebrate her seventieth birthday the right way. Just this once, they are going to behave like an actual family.

Too bad her kids didn't get the memo.

Between the troublesome family secrets, old sibling rivalries, and her two teenage grandkids, Annette's birthday vacation is looking more and more like the perfect storm. Adrift together on the open seas, the Feldmans will each face the truths they've been ignoring--and learn that the people they once thought most likely to sink them are actually the ones who help them stay afloat. - from Goodreads

In honor of Annette’s 70th birthday, she gathers her entire family for a Caribbean cruise. However, it’s not the relaxing trip she expected, as long-held grudges and new secrets threaten to derail the vacation. I love stories about families, so this book really appealed to me; its mix of tough topics and humor, as well as the cruise ship setting, made for an enjoyable read.

Three generations of Feldmans come together for the trip. Annette and her husband David; their daughter Elise with her husband Mitch and children Rachel and Darius; and their son Freddy, with his much-younger girlfriend, Natasha. The family is not particularly close and actually haven’t all been together in the same room for years, so immediately things are awkward, plus there’s the fact that almost everyone is keeping a secret. Mitch and Elise are heading towards becoming empty-nesters, but they’re approaching that in very different ways. Rachel has gotten into some trouble and hasn’t told her parents. Freddy is hiding what he does for a living. David has perhaps the saddest secret of all, and I wished he would just tell everyone.

For most of the story, I really didn’t like any of the characters. Annette was too blunt and harsh, and both Elise and Freddy are still holding onto childhood hurts, despite being middle-aged. The grandchildren were just kind of middle-of-the-road. However, as the story progressed, I at least began to relate a little to the characters, even as I wanted to scream at them to just communicate with each other.

I enjoyed Friedland’s writing; it was very readable. Her commentary on cruise ship vacations (the multitude of activities, the never-ending buffets) was a bit exaggerated but still fun to read. The ship, although huge, forced the family to spend time together and heightened emotions. The pacing of the story was good, despite mostly taking place over the 4-day trip. In addition to the Feldmans, the author also introduces the cruise director, Julian; these were the only parts that I felt the story slowed a bit. Although he interacts with the family, his story still felt so separate. There were so many other characters and things going on that I don’t think it was necessary to add so much of his story in.