5 Reasons Why You'll Love "This Could Change Everything" 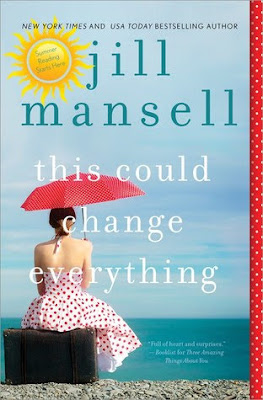 This Could Change Everything
Jill Mansell
Published June 5, 2018


All it takes is one email to end her relationship, get her kicked out of her apartment, and just about ruin her life. Essie Phillips never meant for her private rant about her boss to be sent to everyone in her address book, but as soon as it goes viral, her life as she knows it is over. Solution: move to a new town, find a new job, make new friends. If only it were as simple as that... - from Goodreads

While drunk one night, Essie decides to write one of those Christmas brag letters - except instead of writing about all the fun things she did during the year, she lets loose a rant that somehow then gets forwarded to all of her email contacts.  Since the rant was about her boss, who just happens to be her boyfriend's mother, she loses her job, relationship, and home in one fell swoop.  This Could Change Everything follows Essie as she tries to start over, with the help of her best friend Scarlet and some new acquaintances.  Here are five reasons why I think you'll enjoy this book!

1. Zillah.  Zillah is Essie's landlady at her new home.  At 83, Zillah is still going strong - she loves people, loves going out, and dresses to the nines.  She was so upbeat and charming!  I think my favorite thing about her was her project to grant wishes for other elderly people, kind of like Make-A-Wish but for adults.  I teared up each time she created a magical memory for someone who didn't have a lot of time left.

2. The romances.  I have to admit, romance is not necessarily something I seek out in books, but there were a couple in this book that were just so sweet.  Even though it was obvious from the beginning who would end up with who, I liked the routes they took to get there.  Mansell plays with the idea that a relationship that seems perfect on paper may not actually be one's destiny.

3. The writing.  I love Mansell's writing - it is comfortable and easy-to-read.  For me, her signature is introducing a bunch of characters and then having them come together in some twist of fate.

4. The character development.  I typically like plot-driven books more than character-driven ones, but I actually enjoyed that there was less action in this book.  I loved getting to know the characters and watching their journeys.  Even though Essie is the main character, the supporting characters played roles that were just as large.  Each had hidden layers that were slowly peeled back, revealing more depth.  I think you'll love finding out about Scarlet's hidden talents and learning why Conor (Essie's neighbor) quit a successful career as a lawyer.

5. The ending.  Minor spoiler - if you enjoy a "happily-ever-after," this is the book for you.  At the time I read this book, I really needed something happy and charming and cozy, and this hit the spot.  Was it predictable?  Yes.  Did I care?  No.