Review: The Night The Lights Went Out 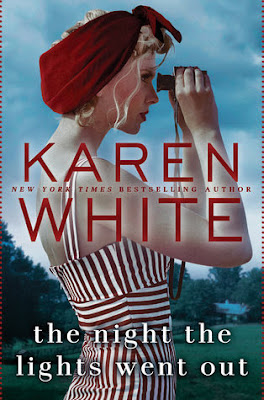 The Night The Lights Went Out
Karen White
Published April 11, 2017


Recently divorced, Merilee Talbot Dunlap moves with her two children to the Atlanta suburb of Sweet Apple, Georgia. It's not her first time starting over, but her efforts at a new beginning aren't helped by an anonymous local blog that dishes about the scandalous events that caused her marriage to fail.

Merilee finds some measure of peace in the cottage she is renting from town matriarch Sugar Prescott. Though stubborn and irascible, Sugar sees something of herself in Merilee--something that allows her to open up about her own colorful past.

Sugar's stories give Merilee a different perspective on the town and its wealthy school moms in their tennis whites and shiny SUVs, and even on her new friendship with Heather Blackford. Merilee is charmed by the glamorous young mother's seemingly perfect life and finds herself drawn into Heather's world.

In a town like Sweet Apple, where sins and secrets are as likely to be found behind the walls of gated mansions as in the dark woods surrounding Merilee's house, appearance is everything. But just how dangerous that deception can be will shock all three women.... - from Goodreads

Wow, there was a lot going on in this book!  First off, I love this cover - I love the retro look (even though the story is contemporary) and it represents the book really well.  This book packs so much into its 400 pages:
I thought this story would be about the friendship between Merilee, the single mom, and Sugar, her elderly landlady.  And a lot of it was - it was nice to see Sugar, who has been alone for so long, really take to Merilee and her children.  However, I felt like these two main characters kind of took away from each other, like their stories were competing with each other for prominence in the book.  For example, there are a couple flashbacks to Sugar's earlier life; while it was good to get to know the character better and discover why she is so cold and blunt, it wasn't enough.  With so much else going on in the story, the flashbacks kind of got lost and didn't fit with the rest of the book.

Another issue I had was with the dialogue.  One of my biggest pet peeves is when dialogue doesn't sound true to life, and in this case, the dialogue was often stilted and too descriptive; there was too much telling and not enough showing.

However, there was a lot to like in this book.  The writing flowed nicely.  The Southern vibe came through very strong; I got a really good sense of the Georgia setting, through the language used (I'm totally going to start using "bless your heart"), the multiple references to sweet tea, and the nuances of Southern life.  I've always wanted to visit this area of the country, and I felt very immersed in the culture through this book.  And lastly, the soap opera-like story is perfect for a light summertime read.