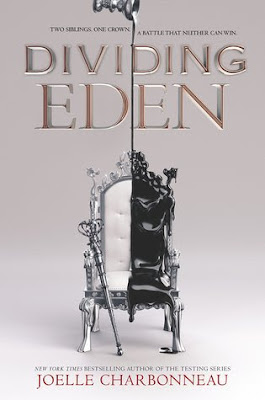 
Twins Carys and Andreus were never destined to rule Eden. With their older brother next in line to inherit the throne, the future of the kingdom was secure.

But appearances—and rivals—can be deceiving. When Eden’s king and crown prince are killed by assassins, Eden desperately needs a monarch, but the line of succession is no longer clear. With a ruling council scheming to gain power, Carys and Andreus are faced with only one option: to take part in a Trial of Succession that will determine which one of them is worthy of ruling the kingdom.

As sister and brother, Carys and Andreus have always kept each other safe—from their secrets, from the court, and from the monsters lurking in the mountains beyond the kingdom’s wall. But the Trial of Succession will test the bonds of trust and family.

With their country and their hearts divided, Carys and Andreus will discover exactly what each will do to win the crown. How long before suspicion takes hold and the thirst for power leads to the ultimate betrayal? - from Goodreads

I love books about royalty, and with the added twist of twins and the fantasy element I've been craving lately, I dove right into Dividing Eden.  However, while it started out strong, the story and characters lost their way and I ended up disappointed.

Princess Carys is strong and stoic.  She has spent her life protecting her brother and helping him hide his secret from the rest of the kingdom, but she's also facing her own struggles, namely an addiction to a painkilling medicine.  Prince Andreus is a womanizer but he also has a big heart for those who are suffering.

After the king and crown prince are killed and the queen renounces the throne, the Council of Elders of Eden is ready to name a new king, even though two heirs remain.  Apparently, no one knows which twin was born first; therefore, neither can be crowned.  Until someone points out that the law says the heirs can battle each other in a series of trials, with the winner receiving the crown.  At this point I was super excited - I couldn't wait to see what trials the twins would have to go through and how they would retain their strong relationship while battling each other.  Some of the trials turn out to be kind of lame and seem to have little to do with ruling a kingdom.  They also move through them so quickly that it was hard to get invested.

Unfortunately, the issues kept coming.  The whole beginning of the story leads us to believe the twins are so close, yet Andreus is swayed by another character during the trials and turns on Carys so quickly, it's really unbelievable.  It totally contradicted what we know about Andreus.  Many of the secondary characters are shady but interchangeable.  Honestly, I kept getting a lot of them confused.  There is a twist of magic at the end that to me seemed to come out of nowhere and isn't supported by anything else in the book (the author gives an explanation, but I wasn't buying it).  Plus, I kept getting a Game of Thrones vibe, with winter approaching and creatures that come out of the woods with the cold.  The writing is also very repetitive - how many times in a chapter can we be told that Andreus has a secret?

Overall, I wanted to love this story - the idea is unique but it also has so many elements that I normally like.  And while I want to see Carys and Andreus find the strong bond they once had, I'm not sure I'll continue with the series.

Email ThisBlogThis!Share to TwitterShare to FacebookShare to Pinterest
Labels: book review, fantasy, YA