Review: We Are Unprepared 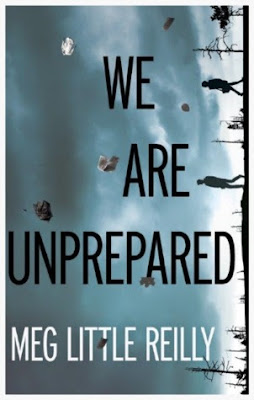 
Ash and Pia's move from Brooklyn to the bucolic hills of Vermont was supposed to be a fresh start—a picturesque farmhouse, mindful lifestyle, maybe even children. But just three months in, news breaks of a devastating superstorm expected in the coming months. Fear of the impending disaster divides their tight-knit rural town and exposes the chasms in Ash and Pia's marriage. Ash seeks common ground with those who believe in working together for the common good. Pia teams up with "preppers" who want to go off the grid and war with the rest of the locals over whom to trust and how to protect themselves. Where Isole had once been a town of old farm families, yuppie transplants and beloved rednecks, they divide into paranoid preppers, religious fanatics and government tools. - from Goodreads

I'm kind of obsessed with disaster movies - natural disasters like earthquakes, tornadoes, or tsunamis.  I'm not sure what this says about me as a person - I guess there's an element of "OMG this could really happen to me."  When I first heard about We Are Unprepared a few months ago, I was immediately hooked - living in New Jersey, I witnessed firsthand the destruction caused by Superstorm Sandy in 2012, and the premise of this book sounded so true to life.  And while I enjoyed reading about preparations for the storm, I really didn't connect at all with the main character.

Ash, the narrator, and his wife Pia are city hipsters who decide they want a change of pace, so they move to rural Vermont.  Soon after, a storm of devastating proportions is predicted to hit the East Coast - it's a bit unclear when it will happen, but Pia is immediately swept up in doomsday preparations and joins a group of like-minded citizens.  Ash, however, joins a local government committee that focuses on getting the town as a whole through the storm.

There are cracks in Ash and Pia's marriage basically from the first page of the book.  While Pia can be impulsive and unpredictable, Ash is pretentious, condescending and critical.  Ash is a seriously unlikeable character - he calls his wife mentally unstable and scoffs at her storm preparations.  And as much as Ash likes to believe that he's just so darn smart, he is really clueless when it comes to basic house maintenance and survival skills.  There is also a whole subplot about the two of them having children (they never seem to be on the same page about it) and a young boy who lives next door, whom Ash becomes very close with.

I liked reading about the changes that were taking place in the environment and weather leading up to the storm.  The author did a great job in creating this world where climate change is happening at an alarming rate.  Warm weather throughout the winter, birds migrating at the wrong time of year, plants growing where they normally wouldn't.  I could have used more of the storm, though.  Almost two-thirds of the book is spent leading up to it, and then the storm itself seemed to pass by so quickly.  We also get a bit of what life is like after the storm, but this too I wanted more of.  I wanted less of Ash (who I hated by the end) and more of the devastation and recovery.

3 stars: 4 stars for the premise, a detailed look at how different people react and prepare for an impending disaster, but 2 stars for the annoying main character.
Posted by Angela at 7:00 AM