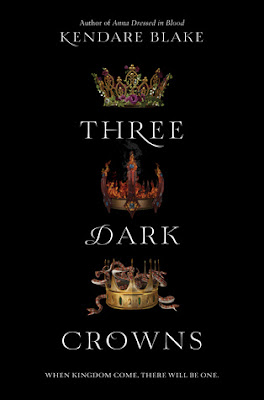 
Every generation on the island of Fennbirn, a set of triplets is born: three queens, all equal heirs to the crown and each possessor of a coveted magic. Mirabella is a fierce elemental, able to spark hungry flames or vicious storms at the snap of her fingers. Katharine is a poisoner, one who can ingest the deadliest poisons without so much as a stomachache. Arsinoe, a naturalist, is said to have the ability to bloom the reddest rose and control the fiercest of lions.

But becoming the Queen Crowned isn’t solely a matter of royal birth. Each sister has to fight for it. And it’s not just a game of win or lose…it’s life or death. The night the sisters turn sixteen, the battle begins. The last queen standing gets the crown.

If only it was that simple. Katharine is unable to tolerate the weakest poison, and Arsinoe, no matter how hard she tries, can’t make even a weed grow. The two queens have been shamefully faking their powers, taking care to keep each other, the island, and their powerful sister Mirabella none the wiser. But with alliances being formed, betrayals taking shape, and ruthless revenge haunting the queens’ every move, one thing is certain: the last queen standing might not be the strongest…but she may be the darkest. - from Goodreads

Based on the Goodreads blurb (and that awesome cover), I was expecting a dark, action-filled read from Three Dark Crowns.  That wasn't what I got, but it set itself up nicely for the sequel.

Mirabella, Katharine, and Arsinoe - triplet queens who each have their own unique power and who will fight until only one is left standing.  Except Katharine and Arsinoe's powers are practically non-existent, while Mirabella is stronger than many queens in recent memory.  The book takes a long time setting up the story, introducing us to each queen and the large cast of characters surrounding her, raising her and honing her skills.  The triplets were split up when they were 6 years old, and we meet them as they are turning 16 years old and preparing for the battle.

I was drawn to this story because of the focus on powerful women.  I loved that a queen rules this island, and her husband is not called king, but only king-consort.  However, this is also YA, so there are, of course, love interests and love triangles, which I could have used way less of.

Even with all the set-up in the story, I wanted more world-building.  I still had so many questions - where are the triplets' parents?  Why are they called queens when they seem to have no power at this point in their lives?  Why do they have to fight to the death?  I needed more about the world they inhabit.  In addition, the writing was a bit stilted and unrefined, particularly in conversations.  It didn't flow very well in some areas.

However, I did enjoy the book.  I liked the political intrigue and the flashes of magic.  I loved how the strongest sister, the one everyone assumes will win, is also the most sensitive and reluctant to hurt her sisters.  And I LOVED the twist ending - so many things happen in the last 50 pages or so, and it really ratcheted up the suspense and action.

3 stars: A solid read with some problems, but Three Dark Crowns was saved by the ending, and I have high hopes for the next installment.
Posted by Angela at 7:00 AM