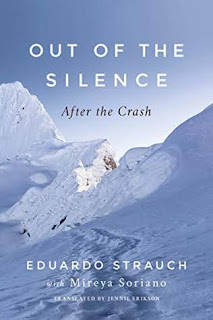 Out of the Silence: After the Crash by Eduardo Strauch with Mireya Soriano

In 1972, a plane carrying the Uruguayan rugby team crashed in the Andes Mountains.  After 72 days, the survivors were finally rescued.  Four decades later, Eduardo Strauch, one of the survivors, was finally ready to tell his story.

This is a fascinating story that I will never get tired of learning about.  Eduardo's approach to this book is interesting; it's not a straight chronological telling of the tragedy.  It's more thematic, and having the benefit of so many years to reflect on it, Eduardo is quite philosophical about it.  He speaks so eloquently and emotionally about his fellow passengers and the things they had to do to survive.  He also gives us insight into his state of mind at various points and how his spirituality provided him with calm and peace.  I especially enjoyed the chapter on coincidences surrounding the flight; it was both eerie and fascinating at the same time.  As much as I enjoyed the writing in this book, at times it did feel a bit too esoteric for me.  I think a more straightforward prose would have been just as effective in some places.  At times, it was also a little hard to follow the timeline of the tragedy and it felt like some things were being repeated.  Overall, though, this is an incredible memoir.  4 stars 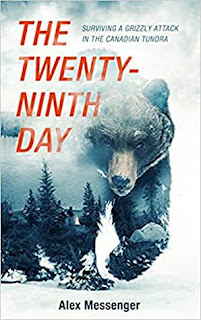 The Twenty-Ninth Day by Alex Messenger

Alex Messenger and his five companions were 29 days into a 42-day, 600-mile canoe tripe in the Canadian wilderness when he was attacked by a bear, leaving him dependent on the other men until help could be reached.

I don't know what it is about survival stories, but I can't get enough of them.  It's so inspiring to learn about people who are able to overcome the most difficult of situations.  Messenger tells his story in a very straightforward, matter-of-fact way.  The first half of the story is heavy on descriptions of the landscape (which I enjoyed) and canoeing techniques (less so).  Messenger's recollection of the bear attack is harrowing; I felt myself cringing as I read it.  His injuries, especially a bite on his leg, were severe, but Messenger was able to convey in great detail the days following the attack, not only his own mental and physical states, but also other struggles the team was facing.  Some of the descriptions of his injuries (and the subsequent treatments) were pretty gruesome!  4 stars