Thank you to Trish Collins at TLC Book Tours for inviting me to be a part of the blog tour for Sisters of War by Lana Kortchik!  I was provided with a free copy of this book in exchange for an honest review. 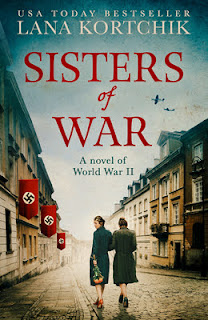 Sisters of War by Lana Kortchik

Can their bond survive under the shadow of occupation?

For fans of The Tattooist of Auschwitz and The German Midwife comes this unforgettable tale of love, loss, family, and the power of hope.

Kiev, 1941: Watching the Red Army withdraw from Ukraine in the face of Hitler’s relentless advance, sisters Natasha and Lisa Smirnova realize their lives are about to change forever.

As the German army occupies their beloved city, the sisters are tested in ways they never thought possible. Lisa’s fiancé Alexei is taken by the invading army, whilst Natasha falls in love with Mark – a Hungarian soldier, enlisted against all his principles on the side of the Nazis.

But as Natasha and Lisa fight to protect the friends and family they hold dear, they must face up to the dark horrors of war and the pain of betrayal. Will they be strong enough to overcome the forces which threaten to tear their family apart?

Historical fiction is one of my favorite genres, and World War II is a particular interest of mine.  In Sisters of War, Lana Kortchik explores the war from the point of view of a Russian woman living in the Ukraine with her family.  Natasha, her sister Lisa, and their family and friends experience love, heartache, and the struggle for survival against the backdrop of war.
I've read many WWII stories set in England and France, but this is the first book I've come across that's set in Nazi-occupied Ukraine.  The descriptions of Kiev and the terrible conditions the people lived under during the occupation were heart-wrenching.  Natasha's family barely had the basic necessities and they were always worried about where they would be able to find food.
Although the blurb talks about two sisters, this story is mainly Natasha's story.  She meets a Hungarian soldier, Mark, who was forced to fight on the side of the Nazis, and they fall in love.  It was a bit insta-lovey, but this is wartime, so I can forgive it a bit.  I was rooting for them so much, for the characters to at least experience a little bit of joy during these terrible times.  I grasped at any bit of happiness I could because the story is so overwhelmingly sad.
Although I enjoyed the book, I did have some issues with it.  The dialogue felt a bit stilted and unnatural at times.  There were threads that were introduced that felt either poorly executed or were never properly addressed in an ending that came on way too suddenly.
3.5 stars