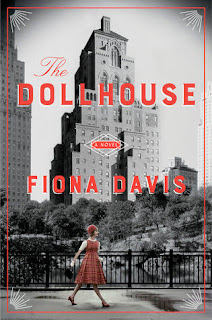 A dual timeline story taking place at the Barbizon Hotel in New York City in the 1950s and 2016.  In 1952, Darby arrives in NYC to start secretarial school; in 2016, journalist Rose begins looking into Darby's past and her possible involvement in the death of the a maid at the Barbizon.

I wanted to read this book because it has so many elements I love - historical fiction, an iconic New York City setting, and a dual timeline.  While some things worked, others didn't.  At first, I enjoyed Darby's fish-out-of-water story.  She's not like the beautiful models she shares a floor with at the Barbizon.  She wants to train for a career so she'll never have to depend on a man.  But then she becomes friends with Esme, a maid, and she finds herself doing things she never thought she would - singing in a jazz club, staying out late, and maybe even starting a relationship.  I got the impression that Darby was the type of person who cared very much what people thought of her and wanted to fit in, so her unorthodox friendship with a maid didn't make much sense.  I also felt like Esme was a bad influence on her, causing Darby to flounder in her studies, and I wanted her to see that.

In 2016, Rose is a neighbor of Darby's at the Barbizon and also a journalist looking for her next big story.  Although Rose had a lot of things going on in her personal life, for me that didn't excuse her unethical behavior in getting her story.  However, I enjoyed the way the two storylines came together - the journalism angle felt like a natural fit.  The writing felt a bit stiff at times, but I still felt drawn in and wanted to know how it would end.  3 stars 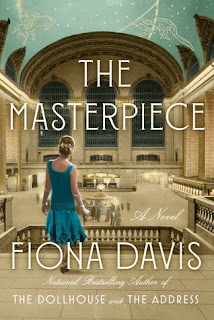 The Masterpiece by Fiona Davis (2018)

A dual-timeline story taking place in Grand Central Terminal.  In the 1920s and 1930s, Clara Darden is a teacher at the Grand Central School of Art.  In the 1970s, Virginia Clay is a woman struggling to support herself and her daughter by working at the information booth in the terminal.

I loved both Clara and Virginia.  Clara is determined and driven, not afraid to find opportunities and further her career.  She came to New York City to become an artist and she knew she had the talent to succeed.  Virginia has had some hardships in her life (divorce, breast cancer), but she keeps moving forward.  I loved her devotion to Grand Central Terminal; she could see its beauty when others couldn't and wanted to save it. I identified with her love for historical preservation.

This is now the 3rd book I've read by Fiona Davis, and her writing improves with each one.  The dialogue flowed well, and she did a really great job of connecting the two storylines.  I appreciated all the research she included about various artistic movements and the history of Grand Central Terminal.  Once the mystery of Clara Darden's disappearance was solved, I thought it was a bit far-fetched, but otherwise the story was very engaging and well-written.  4 stars
Posted by Angela at 3:00 AM