Fiction/Nonfiction Mini-Reviews: The Women Who Lived and Worked in "Atomic City" 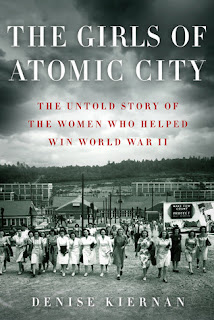 The Girls of Atomic City: The Untold Story of the Women Who Helped Win World War II by Denise Kiernan (2013)

In 1942, Oak Ridge, Tennessee, was founded as a secret work location for the Manhattan Project.  It was more than just labs and factories - an entire town was created, and because of the ongoing war, many women were recruited or applied to fill the positions.  Secrecy and discretion were of utmost importance to the government at this site.  Workers couldn't discuss their daily work with anyone, not even family members.  And no one there knew they were enriching uranium for use in an atomic bomb until the first one was dropped on Japan.

Kiernan offers a broad overview of how Oak Ridge came about and what life there was like, at times through the personal stories of some women who lived and worked there.  While the writing was good, I had a hard time keeping the women straight and the story was at times repetitive.  I thought the book would be focused on women and the types of jobs they did, but there isn't really much about the specific work done.  The book focuses more on life in general in the town - how all the residents tried to make it feel more like home; how there was often a general unease among the residents, because of all the secrecy.  You couldn't ever be sure you weren't speaking to someone who was purposely sent in to spy on everyone.  The narrative ended with the town's reaction to finding out what they had been working on; many residents had conflicting feelings - they were proud that they helped end the war, but at what cost?  3 stars 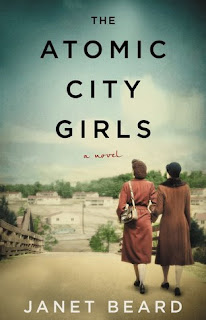 In 1944, June Walker begins work at the secretive Oak Ridge site.  She immerses herself in her new life, forming a friendship with her social climber roommate Cici and beginning a relationship with scientist Sam, but very few people in Oak Ridge know that they are actually helping build an atomic bomb to end WWII.

I love WWII historical fiction, and this is an angle that is relatively new to me.  Because I had read the nonfiction story of practically the same name first, I was familiar with the basic facts behind the story.  I could tell the author had done her research; some parts felt more like info-dump and were very reminiscent of the nonfiction book.

Although the story is mainly about June's journey in Oak Ridge, two of the four main characters are men, so I'm not sure why the book is called "Atomic City Girls."  In any event, I think I enjoyed Joe Brewer's storyline the most.  He is a black construction worker, and while his story didn't really fit with the rest of the book (he doesn't interact with the rest of the characters for 95% of it), it highlighted how differently (and poorly) African Americans were treated in Oak Ridge.  3.5 stars
Posted by Angela at 5:00 AM