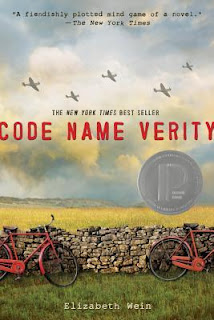 Oct. 11th, 1943-A British spy plane crashes in Nazi-occupied France. Its pilot and passenger are best friends. One of the girls has a chance at survival. The other has lost the game before it's barely begun.

When "Verity" is arrested by the Gestapo, she's sure she doesn't stand a chance. As a secret agent captured in enemy territory, she's living a spy's worst nightmare. Her Nazi interrogators give her a simple choice: reveal her mission or face a grisly execution.

As she intricately weaves her confession, Verity uncovers her past, how she became friends with the pilot Maddie, and why she left Maddie in the wrecked fuselage of their plane. On each new scrap of paper, Verity battles for her life, confronting her views on courage, failure and her desperate hope to make it home. But will trading her secrets be enough to save her from the enemy? - from Goodreads


I've been hearing a lot of good things about this book, so I figured I'd give it a try!   The book is split into two parts: the first is told by "Verity" and includes both her written confession to her interrogators and her own first-person narrative.  The second part of the book is told from Maddie's point of view.  After reading Maddie's section, the first half of the book became so much clearer; I liked how the two sections interwove and you understand why Verity was writing her confession in such a way and also who each of the major players were (or weren't, as the case may be!).  The ending of the book was shocking, to say the least.

It's hard to say too much about this book without spoiling it, and I feel like I should go back and read it again now that I understand Verity's story better to pick up on things I may have missed!

3.5 stars - I felt the Verity character was a little too over the top, a little too snarky, and didn't necessarily feel in place in the time period, but I would recommend this book to YA enthusiasts looking for something different (there's no angsty romance here!)
Posted by Angela at 2:57 PM