Review: Valley of the Moon 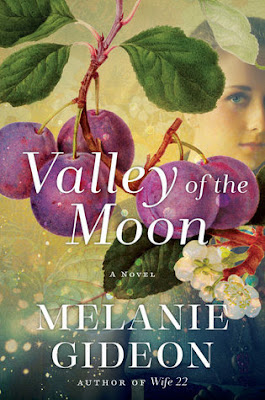 
In this captivating novel from the author of Wife 22, a woman who feels lost in her own time stumbles across a California community that has, impossibly, been marooned in the early twentieth century perfect for readers of The Time Traveler's Wife, Time and Again, and Sarah Addison Allen.

Lux is a single mom struggling to make her way when she discovers an idyllic community in the Sonoma Valley. It seems like a place from another time until she realizes it actually is. Lux must keep one foot in her world, raising her son as well as she can with the odds stacked against her, but every day she is more strongly drawn in by the sweet simplicity of life in Greengage, and by the irresistible connection she feels with a man born decades before her. Soon she finds herself torn between her ties to the modern world, her adored son and the first place she has ever felt truly at home. - from Goodreads

Less than 50 pages in, I knew I was in love with this book.  I fought competing feelings of wanting to rush through the story, because I just needed to know what happens, and wanting to read it slowly because I didn't want it to end.

Lux is a single mother in her mid-twenties, living in San Francisco in 1975.  Although she loves her son dearly, she is struggling in her daily life: she can't seem to get ahead at her dead-end waitressing job; every day feels monotonous; and she is estranged from her parents, who live in Rhode Island.  When Benno, her son, goes to visit her parents, Lux takes the opportunity to go camping, something she used to love but hadn't done in years.  In the middle of the night, she is caught in a thick fog and finds herself in a wholly different place.

Joseph is married, living on a farm called Greengage in the Valley of the Moon in 1906.  At Greengage, Joseph, a progressive for his time, has created a place where everyone is equal and works together.  After an earthquake, Greengage is surrounded by a fog that kills anyone that enters it.  The Greengage settlers are cut off from the outside world, until Lux wanders in through the fog.

It doesn't take Lux long to accept the reality of Greengage.  It feels like a place she was always meant to be a part of.  Every time she stepped through the fog, I could feel her relief and a sense of calm come over her.  Lux is truly happy, and even hopeful, when she is in Greengage, but she can't leave her son.  Eventually she introduces him to Greengage and he, too, takes to it immediately, but she knows she can't force him to stay forever.  He needs to live his own life.  And even though Lux finally starts to get her life in San Francisco on track, she is always torn between her two homes.  The ending is bittersweet, as Lux's decision on whether to return to Greengage permanently is made for her, in a way she (nor I) ever expected.

Time is almost as big a character as Lux and Joseph in the story.  Joseph and his friends and family are trapped in time, and Lux can only reach them when the fog appears.  Lux's ability to reach Greengage is somehow tied to the full moon, but even this isn't exact.  Sometimes the fog shows up every month, and sometimes it is years between appearances.  Time in Greengage moves slowly, while in San Francisco the days and weeks speed by.  At one important point, Lux stays in Greengage for just a few hours past her deadline, and when she returns, she finds she has missed an entire year in San Francisco.  And frustratingly, at times when Lux needs to return to Greengage the most, the fog eludes her.

This story can't be pigeon-holed into any specific genre - it's a story about family, about forgiveness.  It's a love story, but it also has elements of science fiction.  I enjoyed the time-travel aspect of the story; even though it could be confusing, it never felt gimmicky.

5 stars: Sometimes I can pinpoint exactly why I like a book: a beautiful story, flowing writing, distinctive characters, richly drawn settings.  In this case, it's a little harder to articulate why I loved this book so much.  Valley of the Moon certainly had all these elements, but it was really more about the feeling I got while reading it that made me enjoy it so much.
Posted by Angela at 7:00 AM