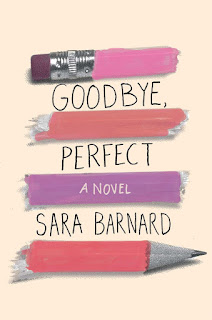 Thank you to Suzanne at The Bookish Libra for the recommendation!

Eden is stunned to find out her best friend Bonnie has run away with her boyfriend, who turns out to be their school's music teacher.

I was drawn to the ripped-from-the-headlines premise of the book, and Barnard did a great job of making the story feel very grounded and real.  Having the story be from the POV of the friend of the runaway added all these extra layers.  Bonnie's actions cause Eden to really question their friendship - she wonders how close they were if Bonnie never told her about the relationship.

Eden says many times throughout the book that her and Bonnie had such a good friendship because they had very different personalities and balanced each other out; Bonnie's steadiness helped Eden.  However, the same could also be said for Eden's boyfriend, Connor - he was such a sweetheart, and I loved their relationship.  I also enjoyed the secondary storyline about Eden's adoption and her getting to know her adoptive sister, Valerie, better.  Overall, it was nice to see all this support around Eden as she grappled with Bonnie's betrayal.  I did want to shake her at times, though; I know she felt loyal to Bonnie and didn't want to break her promise to not reveal her whereabouts, but couldn't she see that her friend could be in serious trouble?  4 stars 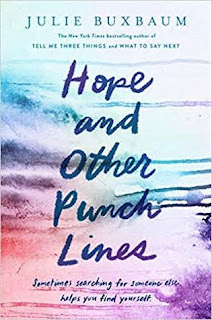 Hope and Other Punch Lines by Julie Buxbaum (2019)

Abbi has spent her entire life being known as the subject of an iconic photo taken on the morning of September 11th.  Now, she just wants one summer of anonymity, but a fellow camp counselor wants her help to get some answers about that day.

Is it bad that I liked the secondary characters more than the main characters?  I sympathized with Abbi about the spotlight that has been on her, and I get that she just wanted to be a normal kid for a little while, but she was keeping a BIG secret, and I was not okay with it.  I wanted her to get the help she needed before things got worse.  And Noah - I didn't like the way he blackmailed Abbi into helping him, even though he tried to make up for it later.  I wanted him to be honest with her from the start.  Their eventual romance was a bit predictable, but they were still pretty awkwardly cute together.

Now, onto the secondary characters - Jack, Noah's best friend, was just awesome.  Funny and blunt, he's what I wished Noah was.  And Abbi's parents were pretty cool, too.  I loved how even though they were divorced, they still got along so well, and Abbi had a great relationship with them both.  Abbi's grandmother also plays an important role in her life and even though she was suffering from dementia, she still managed to have a big impact on the story.

September 11th was a day I'll never forget, and sometimes it doesn't sit well with me when it appears in books - I don't really know why.  However, I thought Buxbaum did an excellent job here of incorporating that day.  She created a unique angle, with Abbi's photo, and brought in some personal stories through other characters.  I also thought the story was informative and sensitive when it came to 9/11-related illnesses.